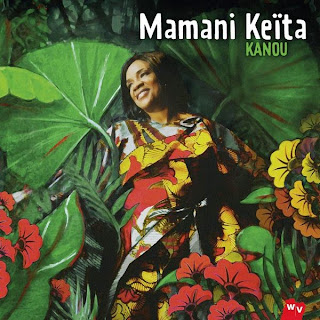 The contemporary world of African music is exploding. Strong traditions unite with electricity lately on a series of albums that are nothing short of extraordinary. We've dealt with several here in the past year and there is another I must tell you about. Mamani Keïta, a fully nuanced singer in the best of African vocal arts traditions, hailing from Mali, has put together a group that combines West African traditional instruments, such as the stringed ngoni (played beautifully by Moriba Koita) and percussion, with the electricity of bass guitar and the spectacularly right-on electric guitar of Djeli Moussa Kouyaté.

All this on her latest album Kanou (World Village).

The combination of the natural bluesiness of the tradition, the call-and-response vocals and the strong groove conjoins with a rock-blues presence that is near irresistible.

Ms. Keïta sings with complete command and authority. The band takes control of the groove in ways that reminds us that musical Africa has always been and remains central to the world's music. In the updated electric versions all the power of tradition remains but the added jolt of modern wattage gives us a new map of what is possible. Highlife was one way that Africa connected with the world, Afrobeat was another. Whatever you may call this new synthesis, when it's done as excellently as it is here, it is calling to us, reminding us of our universal homeland and what has beautifully become of it in music.