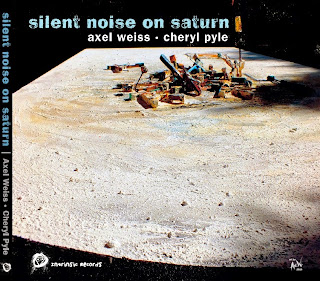 Maybe it's because we are in the thick of the present but it seems to me that there are ever more possibilities in the combination of styles and genres than there were years ago. Noticeably to me, rock has to some extent disengaged itself from the pop parade and taken its place alongside jazz and classical as music more outside the mainstream than previously. You look at the top 20 in pop at any given point now. How many are rock? Much less than 30 years ago. (You might say the same of soul, as compared to hip-hop, but that's another discussion.) So perhaps as a result, there is a continued intermingling of styles happening in all kinds of permutations. I find it interesting.

Turning to today's album we see an example of the confluence of styles. Axel Weiss and Cheryl Pyle join together for Silent Noise on Saturn (Intrinsic Records). Cheryl plays flutes here in her own special way; Axel comes at us with a battery of electric and acoustic guitars plus keys and such.

What's especially interesting to me is the spectrum of styles--from free to jamband to bossa and so forth. Each cut sets up its own world, with Cheryl's beautiful tone and cellular improv phrasings. Axel shows great versatility, driving the music from a rock jamband sound to classical, jazz and folkish modes.

It's mood music for your life. But it has tensile strength and gentleness with content that is substantive. It may not be the masterpiece of the century (how many times is that happening, anyway?) but it floats its way into your ears in a very welcoming way.