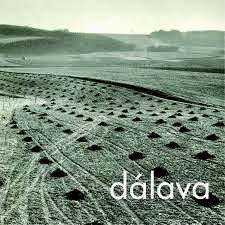 Dálava (Sanasar)? It's a group effort, a most eclectic and unusual combination of Moravian folk songs and New York recombinatory logic. Julia Ulehla prevails on some convincing vocals. Her grandfather collected a good deal of folksongs in the rural Slovácko region of Moravia years ago. The self-titled album is a selection of these songs, arranged for an unusual ensemble of Julia with Tom Swafford and Skye Steele on violins, Shanir Blumenkranz on acoustic bass and Julia's husband Aram Bajakian on electric guitar.

You may think you can imagine what that might sound like, but you could be wrong. It's music that has some avant rock heaviness at times, a new music edge at times and of course the folksiness inherent in the songs. But even then, this isn't something foreordained so much as creatively open and engaging. Some beautiful guitar playing (both metallic and otherwise) and fiddling is to be heard, for example, that you might not expect. And the arrangements are so "downtown" that they will surprise you, even if you think you know "downtown" inside-out.

Julia has singing clout, Aram and the band have a daring approach and when the two combine you get some really rather daring music.

Bajakian has been making some very interesting albums lately (type his name in the search box above) but on this one he, the band, and Julia outdo anything expectable. Startling!