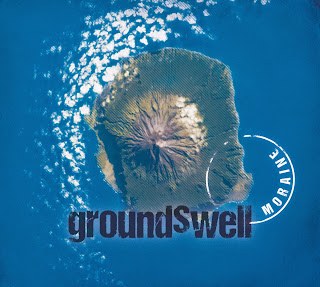 For the thinking person, we have fusion-prog rock by Moraine, the Seattle-based outfit headed by electric guitarist-composer Dennis Rea. I believe this is the third album for MoonJune (066) and it most certainly is a strong one with the band very much homogenized into a multistranded unit of adventure with a sound of its own.

Part of that surely has to do with the individual sound palettes of each band member. Alicia DeJoie plays an electrified violin with a beautiful tone and attack that one might say is post-Steve-Goodman in that it transforms a classically trained background into vibrant electric kinetics. In James DeJoie we have an important ingredient to the band's sound, especially with his rich baritone sax but also his agile flute. Kevin Millard plays foundational and virtuoso lines on the SN stick bass. Tom Zgonc drums with fused rock turbulence and drive. And Dennis Rea plays an electric guitar with a special lining ability that is about wonderful note choice and sound texture, using his chops in the service of the musical statements of the moment.

This set has compositions that work well to bring out the special group sound and to rock through with their own brand of fusion. Rea contributes four pieces, Alicia two, James two, plus there are several by names unfamiliar to me but the music all has that post-Sort Machine smarts that set things up for good soloing all around from Alicia, James and Dennis along with some nice ensemble flourishes.

This may well be the most impressive of their albums in terms of a cohesive original group sound. It is a beautiful listen and will be welcomed by all prog-fuse enthusiasts. Dennis remains one of the more important yet relatively unsung fusion guitarist figures out there. The whole band comes through with flying colors. This is band music with a highly original way about it all.