Pete Seeger, Sing Out America! The Best of Pete Seeger 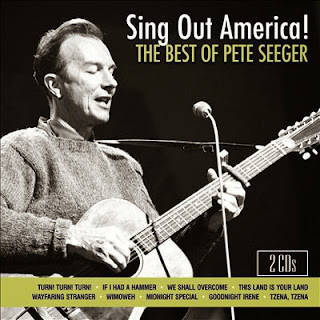 Say what you like about the late Pete Seeger. He did more than anybody to make American folk music what it has been for us in our lifetimes. He was both a popularizer and an authenticist. He could get folk music into the hearts of Americans while at the same time acting in part as America's conscience, as a musical spokesperson for the poor and downtrodden, the victimized, the working man and his plight. And he made the folk song something more than what children sing in elementary school. He was at the forefront of a movement that transformed America, at least for a time but also permanently in the widest sense, made it aware of its musical and folklorish past.

All this is documented and presented in a two-CD set Sing Out America! The Best of Pete Seeger (Dynamic Nostalgia 4931). It amasses live recordings and some studio sessions covering the full spectrum of his career. We get Pete Seeger in his real folk mode--a singer with guitar or banjo. We get some sides with the Weavers, who had considerable success through pop versions of classics that now sound dated but nonetheless were historically important. Sides with the Almanac Singers have a bit more substance and authenticity. Then the best known and no doubt the best here involve Pete as solo artist, covering traditional folk tunes as well known as "The Big Rock Candy Mountain" and those more obscure essentials we came to know in part because of his presence, such as "Johnny has Gone for a Soldier." Then of course there were songs that came to our ears especially via Seeger and might not be known today if it were not for him--Guthrie's "This Land is Your Land" for one. He helped paved the way for a country-wide appreciation of Afro-American "folk" music as well.

Hearing today his anti-war, pro-working man, civil-rights oriented anti-racist songs reminds us that he stood for things that in no way put him in the graces of some authorities, yet he prevailed and helped create a movement that followed out of the music. He created a social awareness and changed the musical turf. We perhaps now take it all for granted because it all got assimilated, hit a peak in the later '60s, then somehow got incorporated into the mainstream. Later, more conservative times followed, but the legacy remains and perhaps is more present in our contemporary culture than it has been for decades. I'll leave that to others or myself in a more expansive mode, but we may be on the verge of a folk renaissance.

This is a nice set that gives you a wide view of what he did musically over time. Through it all was Pete Seeger, spirited singer, good banjo and guitar player, and charismatic showman that made you want to sing along! RIP Pete Seeger.