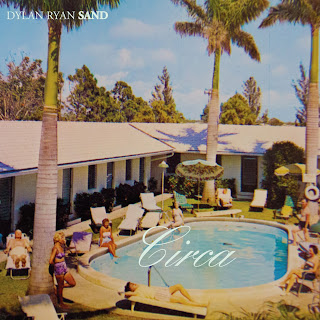 The renaissance of power trio progressivity must be with us. There are some killer examples out there these days. One of them surely is drummer Dylan Ryan and his Sand (Dylan Ryan Sand) as can be heard on their latest, Circa (Cuneiform). This is fuse-prog with some lively compositional ideas from Dylan and excellent playing from all three members.

Tim Young lets loose on electric guitar, Devin Hoff is something to hear on bass, and of course Dylan is on drums, playing busily in the heat of things but always remaining focused.

The spectrum of moods is wide, from spacey and gentle to hammering jazz metal. It's a group confluence but you get lots of tasteful and hard-edged playing from everybody. Dylan sees the band's signature strengths as "harmonic openness or simplicity, the dramatic or dynamic shifts, the ensemble passages and especially group unison parts."

And I would add that it is how those factors play out with originality that makes this band an outstanding one. Tim's guitar has a through-looseness that is nearly belied by the significance of the lines and chordal patterns he unleashes. Hoff and Ryan are both engaged in original ways too.

Listen to their version of Keith Jarrett's old groover "Mortgage On My Soul" and you'll get what the band is doing straight-off. But then the originals take you further into the heart of what they are about.

It's an excellent go, an essential power trio album of the year for those who want involved, substantial music that still has an edge. Hear it.