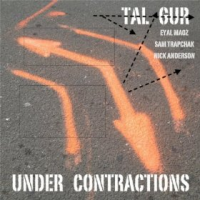 Tal Gur plays alto and soprano sax and composes. His pieces are effective. Tal joins forces with the always interesting guitarist Eyal Maoz, bassist Sam Trapchak and drummer Nick Anderson for the self-released gem of an album, Under Contractions.

Tal excels with outside, mostly quiet lyricism and he shows how that works on the album. Eyal Maoz contributes his sound-sensitive, gritty and sometimes amped-up guitar. As on his own albums, in trios and such, Eyal is a guitarist of quality and stature, inventiveness and leverage. One of the most interesting guitarists today in fact.

The rhythm sections holds its own, providing free-wheeling structures that make this a band in the best way. "Waiting for A Birth", a ballad, succeeds as strikingly well as some of the more up numbers.

Yet throughout there is more than the contemporaneous, there is a group sound that is strong and original.

The guitarist readers will surely dig what Eyal is doing, as will anybody attuned to modern open-form jazz. Tal has a sound of his own, too. And Trapchak gives us some excellent wood in his tone, a nice choice of notes and a perfect running mate for Nick Anderson and his smart drumming.