The Group (Il Gruppo), The Feed-Back 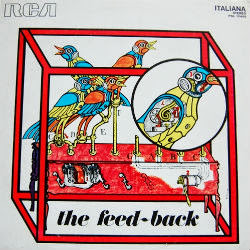 When The Mothers of Invention under Frank Zappa came out with their first album, Freak Out, in 1966, it stunned me. The double album included a long cut called "The Return of the Son of the Monster Magnet", which featured a drummer laying down a basic rock beat, over which was a mix resulting from a studio filled with percussion instruments and a group of crazies who laid down a bizarre concatenation of avant-out sounds. Being a young lad at the time it scared me just a little bit. What was this? It was a "freak out", apparently. That's all I knew for sure.

Here we are some 48 years later. I received in the mail recently a CD with a cover I recognized as having a period look. The Feed-Back was (and is) the album title. On the spine of the CD the artists are identified as "The Group" (Schema Records). I listened and danged if it didn't remind me of the "Monster Magnet" Mothers. A drummer lays down various beats, on top of which are some very intricately, collectively improvised out sounds involving guitars, vocals, various instruments and electronic alterations.

I certainly liked what I heard. If anything, it was better than "Monster Magnet" but well within that mode. So I was determined to cover it. Today I looked up the music on the net and it turns out it is the Gruppo di Improvvisazione Nuova Consonanza, the seminal, pioneering avant improvisation ensemble out of Italy and this indeed, as the label indicates, was originally an RCA Italiana LP recording (from 1970). Like the MEV and the AMM they were critically important for the avant live acoustic-electronics improv scene. Members included Frederick Rzewski, Ennio Morricone. Franco Evangelista, Giancarlo Schiaffini, etc., basically improvising composers.

This album never to my knowledge made it into the bins of US record stores or if it did, I must have missed it. On the front cover nowhere does it identify the artists, so who would have known?

Anyway it's a full album of Il Gruppo in a psychedelic freak-out mode! The reissue gives us the music in an excellent digital remastering and all I can say is, if you have the slightest interest in the seminal avant garde outfits of those days, you do not want to miss it. It's wacky but it is serious about it. The band created here an over-the-top psychedelic ambience that is a genuine pleasure and a hoot.