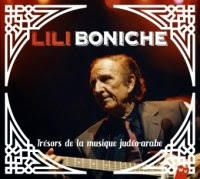 As a novice to Lili Boniche (1921-2008) and his art, I listened to the World Village reissue (with extra cuts) of his classic album Trésors de la Musique Judéo-Arabe (World Village 479094) without knowing exactly what I was hearing. But I got onto its wavelength quickly enough.

Lili was a popular vocalist who combined the Judeo-Arab-Andalusion roots of his Algerian homeland with modern Western elements. The result is a very attractive mix of Latin dance forms (rumba, tango), the introduction of Western instruments (piano, clarinet) and modern elements with traditional Algerian song for a music of the cabaret. It's the music you were somewhat likely to hear in Casablanca at the cabaret clubs in the mid-century, Rick's American Cafe notwithstanding.

There are songs with more of a traditional element and those more modernized, but throughout this is music that stimulates and entertains as it also fascinates in its early east-west fusion.

I recommend it strongly. Listen for some beautiful vocalizing, some nice oud in the orchestra, some hot east-west clarinet, other excellent instrumentalizing, and the arrangements!