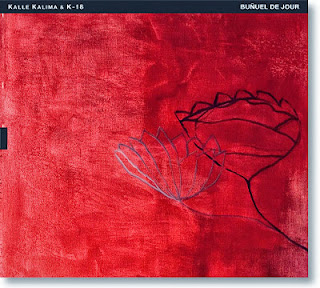 Avant cafe folk thrash? I don't know if that quite covers what I hear on guitarist Kalle Kalima & K-18's album Bunuel de Jour (TUM CDE 038), but it's a start. Kalle has done tributes with this band to other seminal film auteurs--Stanley Kubrick and David Lynch (type Kalle's name in the search box for a review of the latter)--and now he and the band turn to the surrealist icon.

The oil and water contrasts of these musicians make the music vibrate and oscillate like a gestalt rabbit-or-vase foreground-background optically moving drawing. The music is this and that in rapid turns, simultaneously, or within a longer time field.

The ensemble sound and the distinctive personalities of the band members make for both a vivid whole and a caustic series of parts. You can profit just by listening to Kalle's guitar work, but it's meant to be a part of the unusual whole. The avant jazz, rock and cosmopolitan urban folk qualities intermingle in ways that intrigue and keep your attention from flagging.

Hear this one and you'll be challenged and pleasured all at once. Worth your ear-time for sure.