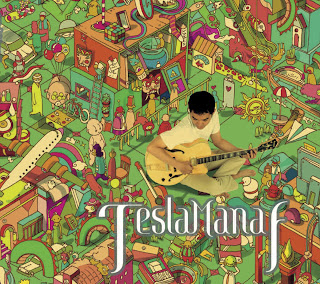 With the appearance of Indonesian guitarist-composer Tesla Manaf's first worldwide distributed album, simply titled Tesla Manaf (Moon June 068), we get some extraordinarily original fusion music that transcends the borders between local and universal in two rather remarkable compositional sequences: "A Man's Relationship with His Fragile Area" and "It's All Yours."

The first sequence gathers Tesla with a very game quartet that includes Ruby Zulkarnaen on double bass, Desal Sembaba on drums and Hulhul on clarinet, tarompet pencak and Indonesian flute. The music deftly combines an Indonesian virtuosity with some of the devices of contemporary fusion. Altogether the result is a very complex rhythmic phrase structure that makes full use of all four instrumentalists in very varied and intriguing ways. Tesla's guitar work is indeed something to appreciate in its intricacies, but the same can be said for the other three instrumentalists in the ensemble context. There is much to appreciate here and none of it sounds derived so much as cast from a very original mold.

"It's All Yours" joins a different quintet with occasional vocals and a number of gamelan instruments. The ensemble this time out is Tesla with Gega Nesywara on acoustic bass, Yo Nafis on keys, Dani Irjayana on drums and the soprano sax and flute of Mumu. Here again the compositional element is the most extraordinary part. The intersection of gamelan style and fusion succeeds wonderfully well, with the gamelan instruments laying out ostinato patterns that are very characteristic but then the fusion instruments complement the music with contrasting interlocking patterns that put everything in a very new, innovative context.

Tesla's guitar work is exemplary throughout. He is central to the complex motifs of the compositions which dominate more so than improvisational excursions, though Tesla has some notable moments to shine here and there. In the end the music is so strikingly original that you pay less attention to individual prowess so much as you enter joyfully into the compositional excellence of it all.

This is world fusion of the highest sort. Anybody who appreciates new transformations of East and West and anyone with a sense of adventure will respond to this excellent album. Bravo!