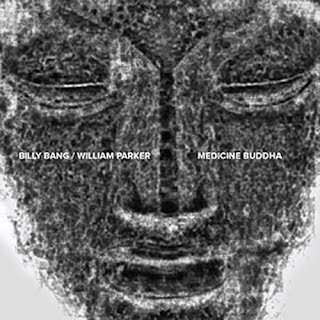 It is a sad truism to say that sometimes it takes someone's passing before we understand what we have missed. That may be true of violinist, composer, bandleader Billy Bang, who has left us all too soon. Thankfully we have his music to appreciate via recordings. And perhaps that impressive body of work will enable his artistry to continue to gain wider recognition. An especially good, later recording is now available--in a series of live duets with the great William Parker, in turn one of the foundational avant bassists on the New York scene, an ever-energizing and innovative force.

William and Billy held forth in May of 2009 at the Rubin Museum in New York. Fortunately the tapes were rolling and we now have it to fully appreciate again and again, as the CD Medicine Buddha (No Business CD 71).

It shows both musician-artists at a genuine peak. Both are primed and extremely in tune with one another throughout. From the opening double bowing twosome and on into various adventurous avant improvisatory propulsions, there is no let-up in inspiration.

Bang clearly benefits from the energy and inspiration of his long-time colleague Parker. He is on a roll throughout with the virtuoso playing he did so well when he was in the right setting. He is on fire.

William sounds especially motivated on this set as well. He is in that untouchable place he can dwell in when everything gels. On bass he sets the pace for other bassists to emulate or match, and the truth is that not many can. But he sounds very appropriate on shakuhachi and the African, stringed dousn gouni, as well.

It is a model of what a contemporary spontaneity can give the listener when the best exponents get the time and space to explore. Clearly the live setting and the general circumstances were especially favorable on that day.

The two come through with some exemplary work. You don't want to miss this one. Long live Billy Bang via recorded examples such as this. And long live Maestro Parker in his central presence today and in the years to come.