Feats First, The Life and Music of Lowell George, DVD 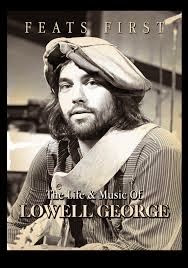 Guitarist Lowell George left this planet in 1979. Yet his music has an immediacy that never sounds dated. Not to me. Part of that has to do with the rootedness of virtually everything he did, but especially in the way he made over those roots into something very much his own.

There is a DVD now out that deals cohesively with his biography and musical development. I watched it several days ago and found it very absorbing. Feats First: The Life & Music of Lowell George (Pride PGDVD 179) gives us more than two hours of his story. It follows the usual format of this kind of video: narrative, interviews and footage of live music and music videos join together to give us a chronological picture.

The story begins with his emergence as a participant in the rapidly growing LA rock phenom in the mid-sixties--as guitarist in one of the bands that enriched the scene in those days. The group records a number of singles, some produced by Frank Zappa, and is the opening band for a number of appearances with the Doors and for Zappa's Mothers of Invention. They do not gain the attention/success they seek and the band breaks up. From there George becomes the lead singer, then rhythm guitarists for the Mothers after Elliot Ingber's departure. Going forward we get the formation of Little Feat, their struggle for recognition and the ongoing development of their sound.

George's slide guitar work, its originality and particularity is given attention as is his vocal excellence. What's nice about this bio-video is the revealing interview segments, from the likes of his collaborator and friend Van Dyke Parks, from band members and contemporaries, critics, producers and engineers who worked closely with him.

A picture emerges of George as musical force behind Little Feat, artistic director, incomparable songwriter, guitarist wunderkind and vocalist extraordinaire. His growing fascination with the studio and what could be done with it forms an absorbing part of it all. The band's struggle for commercial success, its ups and downs with their label and the pressure to be continually moving forward over those years takes its toll. The story looks frankly at George's substance abuse problems and his attempt to cope with it all. In the end he succumbs, dead at age 34. A sad tale yet one that makes you appreciate his original artistry all the more.

It is very well done. You will be captivated by it if you are a George/Little Feat fan, surely.