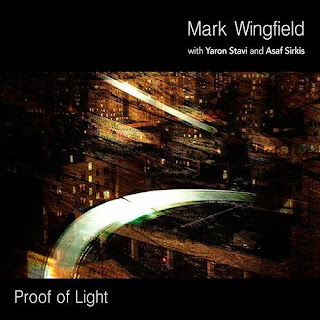 Electric guitarist Mark Wingfield embarks on his sixth sojourn, Proof of Light (MoonJune 071) with a completely developed conceptual-compositional-improvisational stance and some beautifully realized music. He is aided and abetted by a very together Yaron Stavi on acoustic bass and Asaf Sirkis on drums. The music is astutely put-together fusion that avoids sounding like other such outfits, resolutely going its own way.

Perhaps all that has to do with Mark Wingfield's determination to draw upon untypical roots in his listening. At some point, as is mentioned in the detailed liner notes, he decided to stop listening to other guitarists in order not to be unduly influenced, instead drawing upon classic horn-wind playing and vocal styles as disparate as classical Indian, Qawwali Sufi music, and such artists as K.D. Lang and Betty Carter.

In the end Wingfield's style is his own, fluid, dexterous, beautifully singing and nicely smart in note choice.

The three together engage Wingfield's compositions throughout, which are notably intertwined in the improvisations rather than strictly separated out into only head-solos-head playing routines.

The band is marvelous and the music very engaging. MoonJune Records again does us a real service by making this music available. They are rapidly becoming a cornerstone institution for the fusion music style, doing for that music in a way what Blue Note did for hard-bop and postbop.

It is a great record and I do heartily suggest you get it. Wingfield is a guitarist to hear and the trio makes it all a wonderful listen! Kudos!