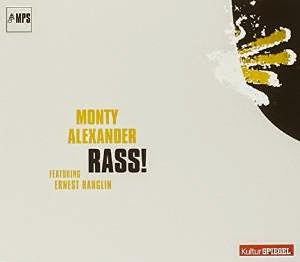 Anyone who lives for a while and at the same time pays attention to contemporary music styles, will eventually experience a kind of abrupt realization that a particular style has gone out of fashion. Perhaps it is all too clear to everyone, such as that moment when disco was totally uncool, but there are more subtle shifts, like with the sort of electric piano-centered funk-jazz that had a heyday that culminated in its wide-spread use across media channels (think of the theme song for the TV comedy "Taxi" as an example) and then faded. I had a moment when I recognized that it had passed.

Of course like cigars it can just as suddenly return and something of that may be happening today. At the same time you can get to the point where, in or out, the style in its best manifestations can be appreciated anew.

That's happening to me on hearing the reissue of an album I never heard back in the days when it could be found in the record stacks. I refer to the Monty Alexander MPS album from 1974, Rass! (MPS 0209737). On it we get Caribbean folk-pop standards and some remakes of r&b hits of the day. It features Monty articulately on electric piano, the convincing electric guitar of Ernest Ranglin, plus a nicely together rhythm section that included congas and percussion.

On my first listen I was slightly dismissive. But then as I listened further I began to appreciate why this music was not rote funk. The rhythm team gives the funkiness some good leverage, Monty Alexander plays with soul and taste and the guitar work of Ernest Ranglin has a real flair to it.

After you live with this album a while you find it is an especially good example of a style that may have faded but need not be dismissed in blanket fashion. Certainly this album is worth your ear-time. Nice.