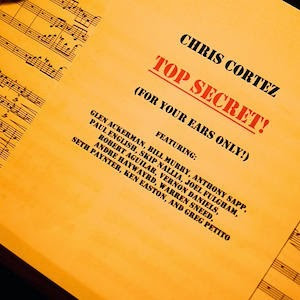 Mainstream jazz electric guitarist Chris Cortez chimes in with a very nicely put-together session that showcases his guitar prowess against a backdrop of piano, rhythm and horns, the latter nicely arranged by Mark Piszczek, with one by Cortez. The album is called Top Secret (Blue Bamboo 026).

Cortez plays a finely honed bop-and-after guitar that has its roots in Wes Montgomery, Kenny Burrell and George Benson and extends them outwards into a very creative solo style.

The quartet nucleus that functions as the fulcrum point for the music is a swinging concern that has Paul English on piano, who solos well when called upon, Anthony Sapp, Bill Murry or Glenn Ackerman alternatingly on bass, and Vernon Daniels, Robert Aguilar or Joel Fulgham on drums. They all sound right. The horns vary in numbers and personnel but have a good presence on four of the ten numbers; the rest are for the quartet, except for "Stompin at the Savoy," which is a worthy two-guitar duo of Cortez and Greg Petito.

A couple of nice Cortez originals spell the primary reliance on songbook, jazz and contemporary standards, anything from Frank Foster's memorable "Simone," which Elvin Jones's group used to play, to "The Man I Love" and Earth, Wind and Fire's "That's the Way of the World."

The accent is rightly on Cortez and his very fluid, tasteful line-weaving and chordal finesse. He is a model mainstreamer, with plenty of schooling and the talent to make the music snap.

Everything goes right on this one. The arrangements add a nice dimension, the quartet grooves and swings and Cortez shows us what he can do.