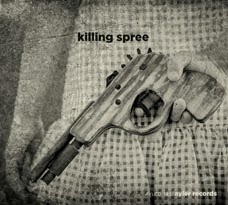 Avant jazz metal? Yes, at least with the debut from an ultra-progressive power trio named Killing Spree, who enjoy their debut on a recent Ayler Records release (143). The lineup is Sylvain Daniel on a very powerfully electric bass guitar, the mercurial Matthieu Metzger on saxophones, often enhanced with effects, and the very busy, driving drums of Gregoire Galichet.

Metzger provides some complicated compositional structures that the band has mastered and made drivingly tight yet free-sounding. Bassist Daniel cranks the bass and often gets a heavily distorted sound that is very virtuoso-oriented and at the same time as heavy as an anvil falling from a skyscraper. He is something to hear, without doubt. But then Metzger plays some startlingly cool sax lines, sometimes heavily effect-laden but continually interesting in their compositional and improvisational brilliance. Galichet kicks the band hard with an excellent, rather devastating drumming that follows the compositional arcs very creatively or just drives ahead with all-out torque.

This is not music for grandma to while away the hours while knitting. It is brash, bold, intense, metal jazz.

And what it is, it is! It is excellently performed and complex and full musically. Any electric bassist who aspires to avant rock excellence needs to hear Daniel on this. But then as a musical whole this one is a knockout all around.

Hang on to your hat and put this one on! Your neighbors may think you mad but you will no doubt be floored by it, if you like music on the edge. I surely recommend it!