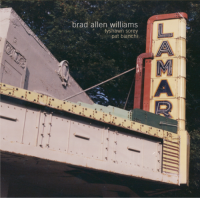 On the docket today is electric guitarist Brad Allen Williams fronting a contemporary organ trio with the album Lamar (Sojourn). It's Brad's debut as leader. He is joined by some serious musical personalities in Hammond organist Pat Bianchi (whose music I have covered here) and drummer Tyshawn Sorey, who needs no introduction, as the saying goes.

What's especially nice about this one is that it shows strong roots in the organ trio tradition, soulful and bluesy, yet has a contemporary tang to it so that we are not in rote repetition mode so much as we are on new-old ground.

Tyshawn swings like the devil, and that's not surprising given his deserved cred. Pat Bianchi channels the jazz organ tradition but adds to it as well with some flourishes all his own.

The repertoire here is refreshed. We get standards like "Stairway to the Stars" and the r&b chestnut "Betcha By Golly Wow," some out-and-out blues-funky feels and a an advanced hip-bop thing by Brad, and even a hopped-up version of "Galveston," the Glen Campbell hit from years back.

Foremost here is the guitar (and electric sitar for one number) of Brad Allen Williams. He has that sort of grits-and-gravy-meets-hard-bop rootedness to his playing, but again, not in any way rote. He contributes his own solo sense and lines-out very well.

I found myself digging in and on to Lamar. Any fan of the organ trio sound will find this different enough that it does not feel like deja vu. Very groovy!!