Waxwing, A Bowl of Sixty Taxidermists 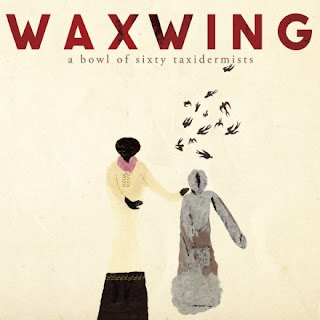 Waxwing is a three-member cooperative group consisting of Tony Wilson on electric guitar, Peggy Lee on cello and Jon Bentley on reeds and multi-instruments. It's a Vancouver-based outfit that gives us some very intriguing music on their album A Bowl of Sixty Taxidermists (Songlines 1611-2).

The music is a modern melodic sort of chamber jazz that features a stand-out three-way intertwining of voices. All three contribute compositions and there are a few collective improv endeavors, too.

I felt the foundational pull of some of Jimmy Giuffre's classical chamber trios in this music, though only as a reference point. The music can get a swinging pulsation or take a sort of rubato approach. Wilson's guitar work is often chordally oriented, but then has important melodic contributions to make as well. Peggy Lee runs the gamut between pizzicato bass-like figures and bowed lines, all in single and multiple stops, depending on the needs of the moment. Jon Bentley shows a coolish yet soulful demeanor and he sounds quite good on tenor, soprano and the nearly extinct c-melody sax.

The compositions-arrangements are primary to the overall sound and bring a special memorability to it all. It is less a platform for virtuoso expression than a more gentle, modern quietude, though each member shows us very musicianly qualities. There are some rather extraordinary group free improvs interspersed between very melodic numbers. And even in those ultra-free moments there is a kind of lyrical edginess to be heard that is distinctive.

A Bowl of Sixty Taxidermists stands out on multiple-listens as a thoughtful, serious, chamber triumph that may indeed be a sleeper but holds great charm for the serious listener. Kudos!