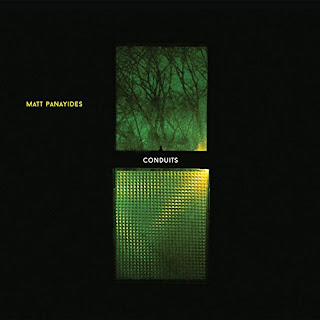 Guitarist Matt Panayides has been leading groups around New York and places far afield for 15 years. Dues he has paid and his playing and composing reflects that and a good bit of talent besides.

We have before us Matt's second album as a leader, Conduits (Pacific Coast Jazz 93430). It is a very nice showcase for Matt the contemporary changes-oriented plectrist and nicely open-ended composer of frameworks for the quartet featured here. It is Matt on electric guitar, Rich Perry in his own version of a Lovano-Garzone-Bergonzi sort of contemporary tenor style, Thomson Kneeland on acoustic bass and Mark Ferber on drums. (I reviewed Matt's first album favorably here. See the February 8, 2011 post for that.)

The rhythm team propulses and anchors well, the tunes have plenty of distinctive moods and modes to vary the program, and both Matt and Rich have space to lay out their good improvisatory ideas.

Matt has a line-orientation that is creative, satisfying and very spontaneously inventive. He post-bops with an immediacy, can invent some chordal figures that stand out, and generally carries himself very well indeed. Rich Perry gives out with contrasting lines that are supple and lively.

In short this is a fine example of a vital mainstream jazz guitarist and his band. It is a portrait that shines with a luster built out of long-time shedding, gigging and prevailing.

Thank you Matt and band! Recommended!