Kyrbgrinder, Chronicles of A Dark Machine 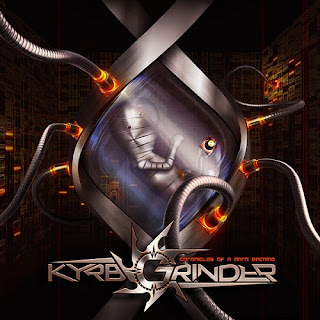 If you like a power trio that plays a very hard and involved metal with a dark shadow to it, you will probably like the UK band Kyrbgrinder and their third album Chronicals of A Dark Machine (Kyrbgrinder Records).

What strikes me about this band in their third go-round is the evolved, very percussive guitar work of Aaron Waddingham. He gets a huge forward-moving sound and takes some very nice solo moments, too. The structure of the songs centers around his power-chord riffing and the whole thing is sustained with the fine bass playing of Dave Lugay and the hard, very effective drumming of leader Johanne James, who sings lead straightforwardly without a hint of the metal affectations or exorcist paroxysms of some of the more tired vocalizing ways out there.

These are very much songs with working parts that make the "Dark Machine" function super-efficiently and to very heavy effect. I have not paid a good deal of attention to the lyrics because they are less central to it all. They seem pretty dark at times but that comes with the package.

It's the relentless onslaught of power metal from three very accomplished, locked-in players that wins the day for me. And the vocals add to it.

If you dig advanced heaviness you will find this album most interesting and worthwhile. If you hate this sort of thing, then stay away. Kyrbgrinder won't convert you to the latest metal sounds if you aren't into it but they will impress if you open up to the music. Power to the max!