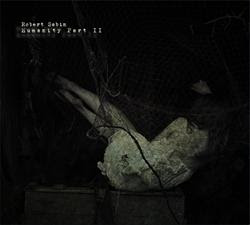 There are bassists who are thought of primarily as performers and there are those who are also bandleaders and/or composer-conceptualists. Robert Sabin is an excellent bassist who belongs in the latter category. He shows us that very nicely on his latest album, Humanity Part II (Ranula Music 2015). It is music of a pronounced composer-arranged nature, featuring a very full ten-piece ensemble of Sabin on bass plus Jason Rigby on tenor, Aaron Irwin on alto, Dan Urness and Matt Holman on trumpets, Chris Komer on horn, John Yao on trombone, Ben Stapp on tuba, Jesse Lewis on electric guitar and Jeremy Noller on drums.

Musically the sound very much informed by the art of film. The title track "Humanity Part II" is a nice arrangement of two of Ennio Morricone's themes for the movie The Thing. Many of the Sabin compositions here take direct inspiration from movies that have made deep impressions on him. And the music subsequently has a evocative feel to it, a series of moods not unlike vignettes in a classic film.

But in the end this is jazz composition of a high sort, with some memorable long-formed themes and an excellent sense of group sound that shows Sabin's very sophisticated and uncanny orchestrational sense. He makes via his voicings this ten-member aggregate sound at times like a much larger band.

There are plenty of good soloists who come front and center in turn and the rhythm team of guitarist Lewis, bassist Sabin and drummer Noller make the music swing with a nice subtlety that sets up the horn scorings well.

It all shows Robert Sabin as a very talented musician, composer, player, leader, arranger. And it is a rewarding listen that may take a few times through to fully appreciate but grows on you the more you hear it. First rate modern ensemble jazz! Very recommended.