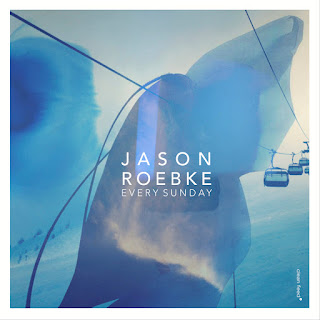 Jason Roebke is part of a very creative bunch of contemporary jazzmen centered around Chicago today. He is to the bass what Jason Adasiewicz is to the vibes. He is a central player in the mix of new Chicago jazzmen, someone who has absorbed the roots of adventurous avant jazz both in Chicago and at large. And he has done something with all of that.

Roebke has been a key member in many Chicago configurations. Here he steps out as a leader, live with a together trio at Chicago's Hungry Brain club, on a recent album titled Every Sunday (Clean Feed 339).

This is the sort of date that has a near-total spontaneity, born of improvisations centered around a key, loose and involved three-way interactions that have an intimacy and a linear developmental arc.

It all has a sort of after-hours sincerity to it, a music where all three get deeply inside what they are doing and perhaps go beyond just pleasing an audience into a zone where creation is all.

And in that way this album is by no means typical. It is not much in the way of extroverted barn storming, of raising the jazz roof. It is a quietly subtle interplay that is remarkably selfless. All three contribute to a total sound that doesn't always call attention to individual parts so much as the threesome-ness of what is being done. Jason can be profitably listened to for his contribution to the mix, and he solos in interesting ways, too. Matthew and Marcus are also very worth following in their individual roles. But it is in the coming together of the trio that the music thrives.

This is not your typical bassist's album. The vision of the trio is paramount. It is a very subtle, intricately understated thing that they do. It succeeds nicely. But to fully appreciate it you must listen closely and allow it time to speak to you. Bravo!