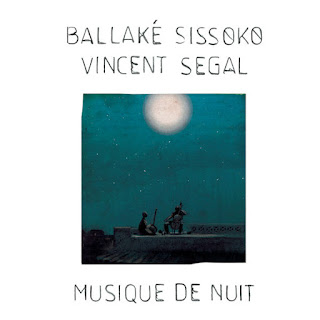 Any string player of ambition and, for that matter, any serious listener to music as a universal cultural heritage should hear and immerse oneself in some of the great kora (stringed harp) players of Western Africa. So I post something here on the guitar blog for that reason. It's more than the usual too because it pairs the phenomenal kora player Ballake Sissoko with the fine cellist Vincent Segal in a series of duos, Musique de Nuit (Six Degrees 657036-1228-2-6).

What is striking beyond the fine playing to be heard here is the way, via alternating compositions by each, there is a fascinating and moving rapport firmly and creatively established between traditional-modern African approaches and cello-centered European elements, between Mali and Paris.

There is nothing that sounds offhand about this meeting of the ways. Both artists listen carefully to one another and fashion some excellent working two-part dialogs, totalities where the two are one with all kinds of varying possibilities. This is music that has been intelligently arranged, rehearsed and intimately realized. The results are spectacular.

The atmospheric realm this music occupies is poetically explained by Vincent: "The night is a special time in Mali. It's a little less hot, and everyone's asleep apart from the night owls like us. The city's not as noisy, music mixes with rumor, and there's something redeeming about simply sitting outside and playing. That's what we tried to capture here, that freedom the night can bring."

Once described in such terms, the music rings true as that. And that destination is especially made beautiful by the musical freshing out Sissoko and Segal give to it all.

The music is wondrous! Beautiful! More I need not say. An exceptional disk.