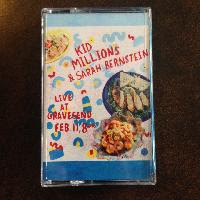 Cassettes are back! I've noticed some cassette-only releases lately. Now I have been sent one! It is in beautifully primitive analogue sound. It features Kid Millions on drums and Sarah Bernstein on very electric violin and ritualistic vocals. It is Volume 5 in the "Gravesend After Hours" series (Gravesend Recordings). So not surprisingly it is entitled Live at Gravesend Feb. 11, 8 PM.

I've always found Sarah's music to be well worth hearing. Kid Millions I do not know by that name, but for this set he really kicks up some torrid overdrive drumming.

Sarah is filled with the energy of quasi-metal violin freedom and when she vocalizes you think New York city is occupied by at least one tribe, which of course it is.

It's totally unpretentious heavy freedom that for me anyway has something about it that sets it apart. It's edgy underground stuff, which the cassette release and the cover art only serve to further underscore.

I suppose I should say that this is not for the timid, nor does it run through standards or swing in some conventional way. All that is cool, too, but that is not THIS.

What it is, it is without a doubt. And the hearing of it initiates you into the tribe and creates some kind of magic. What tribe? You know, THE tribe.

Get it if you want some heavy-duty obscurity that is really very good.