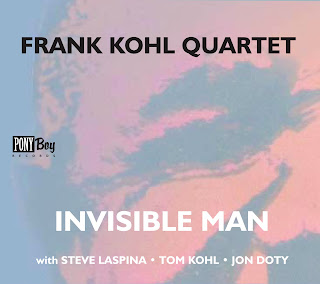 Frank Kohl has a nice way about him in the mainstream jazz guitar zone. He grew up digging Wes, Pat Martino, George Benson, then John McLaughlin. He went to Berklee and graduated with honors. He put out an album while he was gigging around New York, then moved to Seattle in 1990, where he still holds forth.

The band swings along well and Frank has a spotlight role on guitar, spelled nicely by Tom Kohl as second soloist, but then we hear from Steve on bass solo, too.

Frank shows his roots with some Wes-&-George-inspired harmonic and melodic touches and furthers his own sort of post-bop/hard-bop take on it all. He is poised, polished and swingingly lined/aligned throughout. It's all good music. It shows Frank off well as a thorough stylist and imaginative improviser. It's a nice listen.