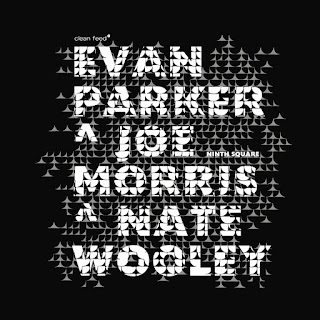 When you think of a possible trio of avant all-stars, improv freedom and jazz ahead music, you could do worse than think of Evan Parker, Joe Morris and Nate Wooley. A lot worse. Each is in his own way an outstanding avant stylist. Evan Parker is no doubt the best known, has the legendary reputation of a reed player of undoubted originality, importance, soul and flow. Nate Wooley is fast becoming one of the avant's most significant trumpet men. And Joe Morris is a world unto himself on the acoustic and electric guitar.

So when these three join together you expect some fireworks. And that is exactly what you get on Ninth Square (Clean Feed 335). It's the three getting it very together live at Firehouse 12 in New Haven last year.

There are torrents of notes. Not just any notes. Notes that suggest an overflowing of spirit, an ambiguity of tonal center at times, a timbre-rich confluence of energy. Now that is certainly what Evan Parker is known for and does so well. And he sounds as good as ever here. Nate is in the mode, too. He knows how to respond and counter the stream with one that goes well with the others. And he sounds terrific. Now anyone who has picked up a guitar should know that a torrent of chromatic and otherwise outside notes is no easy matter (not that it is with horns, either). It is not an intuitively given possibility of the guitar. It takes a lot of preparatory shedding and a sense of where you are going.

Joe Morris excels at this kind of playing. He is at the very top of guitarists who can take it out in smart torrents. And he shows us how he is pretty much the perfect guitarist to join with Parker and Wooley in noteful avant expression. And like the horn virtuosi here, he varies the timbre and attack, the manner of note production, the color of the sound.

So that's why this album is posted here on the guitar blog, though of course it would equally be home on the Gapplegate Music Blog as well. It's for Joe to have the ability and imagination to engage in this sort of dialog with two horn masters of the idiom.

It is a beast of a set. It shows the three in excellent form, running on all cylinders, creating overall smears of vibrant expression.

It's not just music for guitar players to hear and marvel at, of course. This is music for three equal partners in sound generation. Fine music. Out music. Open up to this and go places!