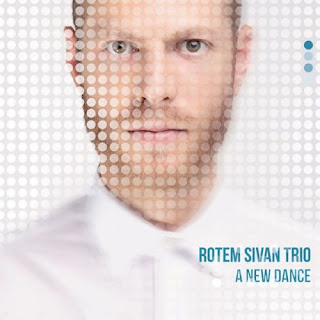 A new jazz guitarist on the scene? Get in line! No, seriously, there are some great new players out there, new to me anyway, and I try to cover the best of them when their music crosses my path.

One of them surely is Rotem Sivan. He has an album out, the Rotem Sivan Trio's A New Dance (Fresh Sound New Talent 480) and I have been digging into it and digging it. He is a sort of post-Abercrombie player with some prodigious chops, an electric sound that has purity in a spacey way but also can get an edgy distorted sound, too. His version of "Angel Eyes" may startle you with its suspensions, its bass (Haggai Cohen-Milo) carrying of the melody, and its very rockish guitar eloquence. So Haggai very nicely covers the bass realm (and solos in distinguished fashion) and Colin Stranahan does very subtle but very well-turned drum work.

But this is Rotem's moment in the spotlight primarily, and he comes through with some impressively wrought guitar mastery. There are a bunch of originals that stand out and a couple of standards.

What strikes me is his harmonic sense in tandem with a sharply etched ability to weave magical lines. Really, this is a player with a very sophisticated feel for what can be done, but also an immediacy, a sense of expressive fire when needed and a quietly devastating approach when not.

Here's a ringer, a guitarist of true merit. Grab this album and enter his very substantial world!