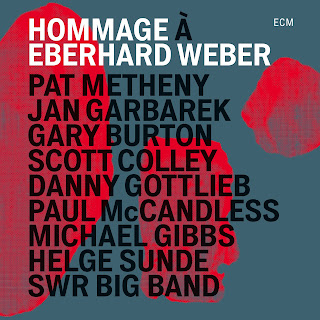 Eberhard Weber has been one of the innovative bassists of our era, without a doubt. His many recordings as a leader and sideman on ECM are seminal. He is a bassist with a special sound, a lyrical acuity and a compositional approach to soloing that sets him in the highest echelon of players of our time. And of course his compositions themselves are of a piece with his musical approach and wonderful in themselves. A stroke in 2007 put an end to his playing, very sadly. But he has made several excellent recordings in later years by taking live bass solos that were captured on tape and orchestrating them. (You can type his name in the search box above for more on that.)

For the occasion of his 75th birthday earlier this year a special concert took place at the Stuttgart Theaterhaus with many of his friends and close associates. Hommage a Eberhard Weber (ECM 2463) is the result of that happy gathering.

On it is featured a special 30-minute work written by Pat Metheny especially for the concert, "Hommage," as played by the SWR Big Band and soloists, including Pat. Featured as well is "Resume Variations" composed by Weber, with looped and resituated Weber bass solos and some fine improvisations by Jan Garberek.

Ralph Schmid, Michael Gibbs, Rainer Tempel, and Libor Sima each arrange a Weber composition for the SWR Band and soloists, with fine results.

And what soloists! In addition to the presence of Metheny, Garbarek and SWR Big Band members, joining them on stage are Gary Burton, Scott Colley, Danny Gottlieb, Paul McCandless, Klaus Graf (alto) and Ernst Hutter (euphonium).

The result is some excellent music and fabulous sonarities. It is a most fitting tribute to the master, yes, and some very fine music in its own right. Essential listening.