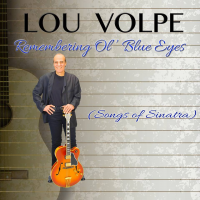 Lou Volpe, the consummate jazz and session vet guitarist, comes front and center to do something one might not expect. He has gathered together some very hip sideman to record an album of songs associated with Frank Sinatra. Remembering Ole Blue Eyes (Songs of Sinatra) (Jazz Guitar Records 917) turns Lou and his band, including pianist Onaje Allen Gumbs, loose on 13 chestnuts that Frank phrased and finessed his way through over the years. And then there is a concluding tribute-original.

To hear Lou in action here is to hear a man who has created his own way through the guitar maze. He sounds as great as ever. The arrangements give it a sheen that is sometimes referred to as "radio-friendly," and so it will likely have a wide appeal.

But forget all that and LISTEN to Lou. He makes the melody lines his own with the nuance that Frank embodied, not literally so much as parallel, as two artists concerned with owning an interpretation of a song.

Lou certainly does that. All those years, all those sessions, the interactions with some of the best, all culminate in the Lou Volpe of today. He succeeds in making a living, soulful guitar organism out of what otherwise might at times be just another "smooth jazz" bit of glitz. Not here, though, not with Lou carrying on so convincingly. Bopping, bluesing, taking on a song and taking ownership of it authoritatively.

In the end, the songs are great and Lou is too.

Posted by Grego Applegate Edwards at 11:47 AM