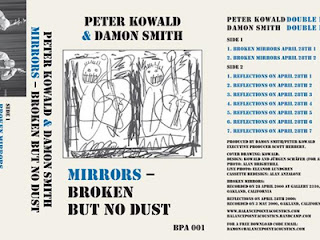 Peter Kowald was one of the greatest avant jazz improv bassists alive before his untimely demise. Damon Smith was and is an important bassist on the scene as well, very deserving of our attention. The two recorded an extended album of duets when Peter made a rather triumphant tour of the US in 2000. It has been out of print for a while but happily is now again available as an audio cassette. Mirrors - Broken But No Dust (BPA 001) brings us the music in all its glory.

What is perhaps most striking about the duets is the incredible rapport established between the two. Whether a hornets nest of busy pizzicato, an ethereal thicket of bowed harmonics or a jungle of slapped string tones, the two form a perfect interlocking of duality-in-singularity.

It is music of great energy, manic expression, exuberant simultaneity. It gives you improvisational segments of sonic unity and virtuoso outness.

For a supremely unified two-bass expression, this recording has few rivals. Grab it while you can. Contrabass aficionados take note. A two-bass hit!