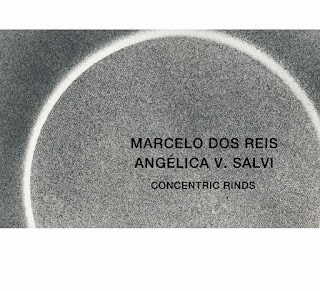 The album up for discussion today is a winner on all counts. What we have are eight improvisatory duets between acoustic guitarist Marcelo dos Reis and harpist Angelica V. Salvi. The music was recorded in a resonant warehouse several years ago. The resulting album is Concentric Rinds (Cipsela 004).

Both Marcelo and Angelica at times "prepare" their instruments, which means they attach various objects to the strings to give the sound an extended set of possibilities, a practice that hearkens back to John Cage and his famous "prepared piano" works.

The duo came out of several larger ensemble gatherings that included them both, back in 2012. Evan Parker who was part of the second ensemble suggested that the two try some music as a duo. The results are not exactly history as yet, but the pairing bears some beautiful fruit on this album.

There are times where the music occupies a space reminding one of classical traditional northern Asian music. Other times there is a new music, post-Feldmanesque kind of quiet thoughtfulness. Still other times there is kinetic motion and dynamics, and times when there are oblique references to jazz lining.

Throughout there is real artistry and smarts on display, born out of the acute sensitivity of the artists toward their instruments and the sound possibilities that can be generated, and a very cohesive mutual openness to what the other is doing at any given point.

It is music of supreme beauty, harp and guitar playing excellence, a realization of some stunning music that is avant without much in the way of cacophony or pronounced dissonance, which means that those who perhaps are not used to new music improv will more easily take to this music than might be the case otherwise.

But no matter your background. This is instrumental interaction on a very high plane. Marcelo dos Reis and Angelica V. Salvi are a perfect fit. These are two excellent players who hit it off beautifully. Get this one.