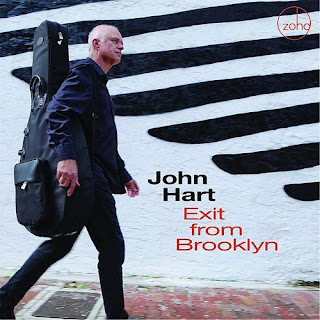 Guitarist John Hart entered Brooklyn in 1984, one of those hopeful young jazzmen that chose the B-town as a place where aspirations might be realized, as a part of New York City that was still affordable and chock full of similar musicians and good playing situations. There he met Bill Moring on bass and Tim Horner on drums. They clicked and though they eventually left Brookyn for the burbs, still thrive together as a trio.

Some four CDs later they are once again at it on the appropriately titled Exit from Brooklyn (ZOHO 201605). This one was designed to showcase a couple of Hart originals and a bunch of standards, jazz and songbook, so they could get the spontaneous chemistry going without a lot of preparation.

That they are successful can be felt from the first cut on. Hart is a well-schooled mainstreamist with a beautiful sense of chordal possibilities and good ideas for lining. Moring and Horner have jazz sense in abundance and yes, bring with Hart a sympatico three-way chemistry that makes this outing something very worth hearing.

John Hart is one of the best straight-ahead jazz artists operating today and the album is a definite pleasure from start to finish. The trio is in great form!
Posted by Grego Applegate Edwards at 4:41 AM