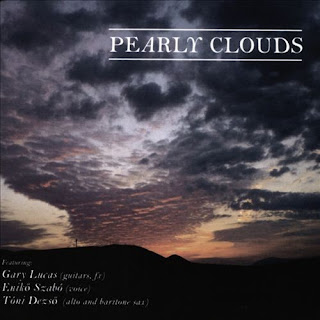 One thing about Gary Lucas is certain. He will not be pinned down like some lab specimen and subjected to rigorous dissection. He is ever in motion. His various projects over the years find him as a key contributor in ensembles or prevailing beautifully in solo contexts that vary in proportion to the great musical maze of possibilities out there. So whether it be old Chinese pop tunes from early last century, the music of Max Fleischer cartoons, music from classic film, or you-name-it, he engages wholly in each creative project and makes of it something significantly more than it would be elsewise. He takes it all on, absorbs the essence and adds his very inventive musical brilliance for an always transformative result.

The new album Pearly Clouds (Trapeze TRACD6514) is a venture into what the liners call "psychedelic world music," a situating of traditional Hungarian folk melodies and/or lyrics within a music of today that channels blues and contemporary Gary-oid soundings for something very unique.

Gary is on his trusty Gibson acoustic but also his Strat with its patented effects spaciness and singular sound. He is joined by vocalist Eniko Szabo, who has a nicely turned musical way about her and carries the melodies with a tender strength and impeccable musicality. Toni Dezso plays alto and baritone sax here in an effectively elemental manner, which one might say is more folksy and local than it is typically, notefully jazzy. It all works well. The key undoubtedly is Gary's beautifully wrought guitar parts, carved out of a harmonic and melodic reworking of the implications of each song and the tonal specifics of Eniko's sung lines.

These are recompositions and compositions that do not leave behind classical Hungarian melodic form, but place it within Gary's creative guitar-centric soundings and Toni's simpatico sax fundamentals.

It is yet another example of the extraordinary Lucas touch, his inimitable picking and sounding acoustic work and his equally inimitable psychedelic electric atmospherics.

It all underscores once again the restless creative ingenuity of Gary Lucas the guitar master, with transformative inventions that set off Eniko Sabo's lovely vocals and their Hungarian centrality and set the stage too for Toni Dezso's melodic primality.

Gary Lucas thrives as a guitar school of one, an innovative master who rewards with a continual reinventing of what and where his music can thrive and what that entails. He has a beautiful musical and artistic counterpart with Eniko and once you set aside whatever expectations you might bring to the music it creates its own space inside your listening mind.

And so I suggest that you check out this beautiful album, for the wonderful guitar playing, yes, and so too for the overall musical world it creates and sustains so well! Bravo!
Posted by Grego Applegate Edwards at 5:51 AM