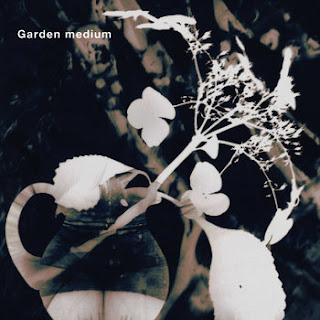 Art is not only involved with the visual, of course. It is sometimes put forward for us in sound. And today we have a trio of sound artists creating spontaneous worlds-upon-worlds that in the end are most decidedly on the level of contemporary art.

I speak of the recent album Garden medium (>x< 03), that features the trio of Sandy Ewen on guitar (see recent reviews of her work here via the index) and objects, Rebecca Novak on cornet, autoharp, shortwave radio, glassware and chimes, and Carol Sandin Cooley on electronics and objects.

This is selfless music. It is all about the special sonic blends, sound poems that utilize instruments and objects, electronics and intentional sound-producing gestures to create a series of atmospheres.

Sandy creates a world of sound here that is not instantly recognizable as electric-guitar generated. Similarly the other sonic voices do not intend to stand out as personal, individual "playing" of instruments so much as modular contributions to the sound environment totalities.

Do not take that as meaning that this ensemble is not musically adept or random. On the contrary the environments are built up with care. There are dynamics, a focused use of space, a striving after a pallet of music-noise specifics that gives the music-sound a special inner-directedness.

This is avant, yes, free, yes, but very atypical in its rigorous focus. You put the disk on and it gradually has its way, in a sort of Zen rock garden of presence.

If you played guitar like Sandy does here on a wedding gig, you'd be fired and quickly at that. And the same goes for what the other trio members are doing! It is the case because the music functions in a world that is not made for commercial or widespread social consumption. It is not a product to be consumed at all, in fact. It is about process, the aural equivalent of a scumbling of paint to transform the hard-edges into something blooming, pliable, open, virtually endless.

This may not be for everybody. And things that are, after all, tend to get boring because to succeed with everybody, you need to give them something they already have plenty of, a formula, a guaranteed path to maximum consumption. This music in not so much minimalist as it is sparing and judiciously meted out a bit at a time. You must enter into it for it to work. And you must not consume it, but rather leave it to be, to realize itself before your ears.

I find it fascinating!
Posted by Grego Applegate Edwards at 6:24 AM