Jon Lundbom and Big Five Chord, Bring Their 'A' Game, The EP Series 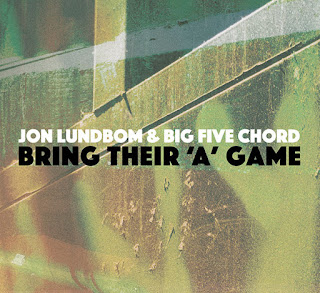 I happily return here to report on the second in a series of four EP disks by Jon Lundbom and Big Five Chord. This one, just out, is called Bring Their 'A' Game (Hot Cup). It continues where the first, Make the Magic Happen, leaves off. (I covered that one last month here.) Yep, they continue with another vibrant set that has compositional bite with two hefty originals and once again closing with an Ornette perennial. It also has the growl of the band in improvisational fullness. Jon plays some beautiful guitar as one expects, he IS one of a kind after all. But then you get some supercharged sax from Jon Irabagon and Balto Exclamationpoint, and beautiful rhythm section effusions from Moppa Elliott (bass) and Dan Monaghan (drums).

This is take-no-prisoners out bop and more. Make no mistake. Lundbom has the subtle leadership that gets everybody to give of things their considerable all, and Jon does the same. Can I just say "chuck everything and get it"? Well I will.

The remaining two EPs will be coming out later on in the year. You can get each one as it comes out, or pre-order now for the 4-CD box set that will come out when the fourth CD does, thereabouts.

If the other two are like the first two, there is something important going on! There is already!