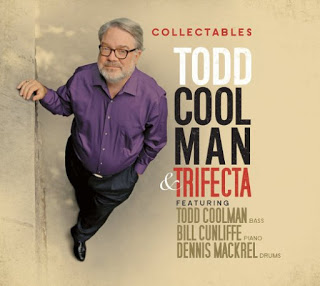 When a bass player has virtually played everywhere and with everybody, there are good reasons for it. Todd Coolman is one of those bassists. He can fit in with everybody and does. But a solo album of his own is not all that common. In fact, what we have at hand is only his fourth, but no matter, because it in part makes up for what hasn't always been available.

He joins together with two exceptional musicians in a threesome he dubs "Trifecta." They gather together some really nice numbers and let it all breathe in the recent album Collectables (Sunnyside 4025). As Todd explains in the liners, he has amassed some collections over his life, things that have a telling sort of significance for him, be it books, fishing tackle or wrist watches. And he goes on to explain that he also collects playing experiences with fellow musicians of like mind. Collectables is by a trio of musicians that form a key part of some imaginary spatial totality but very real temporal-musical gatherings Todd has been a part of. A prize collectable element in all his group playing experiences, in other words.

Bill Cunliffe, pianist, Dennis Mackrel, drums, (and Todd), have been playing together for a while, principally as a part of the faculty of the Skidmore Jazz Institute that Todd now directs. They have had busy schedules there performing as a trio alone or backing up other stalwarts. So that is one definitely worthy collectable element on this album, the trio itself. The other is in the program of tunes. These are very worthwhile ones, some not often played these days, such as "New Rhumba" (associated with Miles and Gil Evans), "Joshua," the Victor Feldman perennial, and so forth. Some of these numbers are given special arrangements by Renee Rosnes, Bill Cunliffe, Dennis Mackrel; the others have gotten their form by the trio working it all out as they went. All have a special worked-through quality that a piano trio gets by playing together often--and so also the improvisational doings have that patina of use that makes them especially excellent examples.

Todd has plenty of chances both in ensemble and in solo to show just how fine a bass player he is. The same goes for Bill Cunliffe and Dennis Mackrel on their instruments. And the sound of them as a trio benefits from that distinctiveness but also by their irrefutably swinging wholeness.

It is the sort of trio outing that has all the jazz nuances down but also gets it all DOWN! It is a beautiful record indeed. There is nothing lacking. It is a full collection to be poured over and prized, dug and re-dug!  By all means go for this one if you want some superfine mainstream jazz as it should be played.