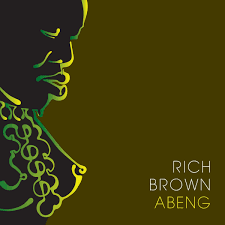 From out of Canada comes electric bassist and composer Rich Brown and his recent album Abeng (RDB 03). The title refers to the hollowed-out cow's horn which is traditionally used by the Maroons of Jamaica to call the community together for social gatherings and to communicate news and other messages. It is a kind of metaphor for Rich Brown's musical communications, dedicated to the fight against racism and the all-important Black Lives Matter movement.

This is a very worthwhile set of Afro-Fusion Jazz, with Rich Brown playing a key role as a virtuoso of the electric bass and as composer of the music heard here. He is joined by Luis Denz on alto and Larnell Lewis on drums, plus a shifting gathering of Chris Donnelly or Robi Botos on piano, Kevin Turcotte, trumpet, Kelly Jefferson, tenor, and Rosendo Chendy Leon on percussion.

The music has memorable compositions, a good deal of space for Rich's eloquent bass playing both in ensemble and as soloist, as melodist and riff master, and a very solid, tight and proficient group of sidemen that establish moving fusion grooves and lyrical suspensions as called for, improvise nicely, and realize Rich Brown's objectives fully.

Rich Brown is a bassist of stature. The album is filled with worthwhile contemporary music. You should check it out!

Posted by Grego Applegate Edwards at 6:17 AM