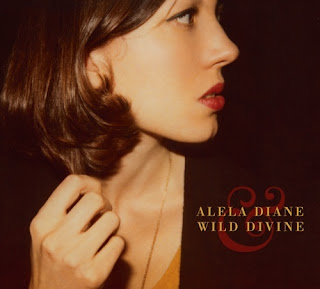 Alela Diane writes songs and sings them with her band Wild Divine, which includes husband and also father, so its a family deal at least in part. She wrote the songs on the new album, simply titled Alela Davis & Wild Divine (Rough Trade) while on the road in 2009.

If I were to tell you she kind of reminds me of a female Neil Young in the folk-country rock zone, I would need to qualify that with the idea that her songs have earthiness and an honest directness, they have a musical richness-in-simplicity too. All of that reminds me of Neil Young. But that doesn't mean if you put her music on your system you'd think, "right, a woman version of Neil Young," because she doesn't sound like him.

I won't rattle on this morning. I will say that Alela Diane has talent and she writes good songs. There you are, if you care to go with it.
Posted by Grego Applegate Edwards at 6:16 AM