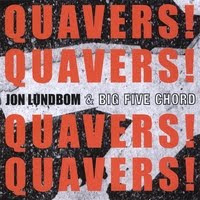 Hip guitar-stringer and composer of melifuidity Jon Lundbom comes at us again with a welcome new offering, Quavers! Quavers! Quavers! Quavers! (Hot Cup 104). It's his Big-Five Chord aggregation again, with Mostly Other People Do the Killing members--bassist Moppa Elliott, and the alto-sopranino of Jon Irabagon. Then there's Bryan Murray on tenor and "balto!" sax (?), Danny Fischer, drums, and the guest appearance of Matt Kanelos on keys.

It is ensemble music of a definite currency. Adventurous, a bit electric, loping, freestyling and rocking along with some very interesting lines and excellent solos from the principals.

Lundbom has a definitely-subtly-quirky sense of what goes with what (that he in part shares with his MOPDTK colleagues). It comes out in his pieces as well as his solos and it is most refreshing to hear. It's downtown in its own way, without staying on any particular block for very long, though.

And there's a sense of wackiness that is refreshing. What else? Well it's engaging music. That should be enough to wet your whistle. Listening will make your whistle that much the wetter! So I do recommend you take steps accordingly.
Posted by Grego Applegate Edwards at 5:15 AM