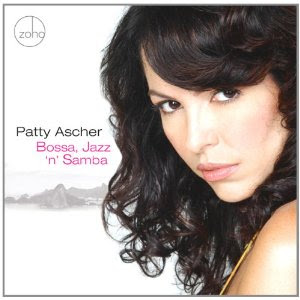 Back when M.O.R. designated music that wasn't rock, wasn't country, jazz or R&B, but was music that was generally made for folks who had grown up in the swing era and wanted something that soothed the nerves, there were many releases taking on the superficial semblance of the new Patty Ascher album Bossa, Jazz 'n' Samba (Zoho 201103). That is, take a mellow female vocalist, add a lushly arranged carpet of strings and a mildly pulsating rhythm section, then provide listeners with pop-standards fare that might be gently melancholic, regretful, something to make the martinis go down easier.

At the same time, there was a body of bossa nova music coming out of Brazil. The music had much in common with M.O.R. except the rhythmn section was geared to the new beat as it were, a kind of gentle samba. Then too there was a body of songwriters, singers and arrangers that gave the music a distinctiveness that took it pretty far beyond the easy listening moniker.

Patty Ascher's album comes out of that. Her voice is nuanced and silky. The rhythm section has a latin-bossa touch, the arrangements are lush but harnessed to the bossa style mostly, and the songs, most by Patty and her musical partner Marco Pontes, have a definite heft to them.

It's quite nice listening and Ms. Ascher's voice has definite charm.
Posted by Grego Applegate Edwards at 4:24 AM