USA Is A Monster's Last: RIP 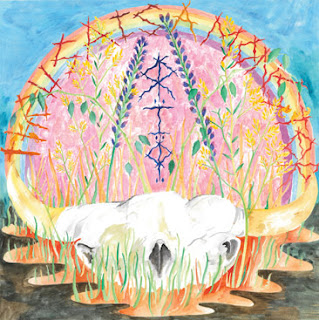 We've just dealt with Colin L.'s first solo effort after the demise of USA is A Monster. Today we look at that band's last, RIP (Northern-Spy). I peeked at the press sheet accidentally and saw that somebody said "Banal? Sure, but..." something like banal-good. Banal-good? Yes. It in some ways, at least in the opening minutes, sort of takes Van Dyke Park-Brain Wilson's Americana lyrics from Smile and makes them snide. And musically there is some relation too. What the relation is would be something you might explore if you were to listen to the album a bunch of times.

Beyond that, there is an indefinable something about this music, much like Colin L.'s album only perhaps slightly less so, something that hits you like an out-of-control Frisbee you didn't expect somebody to throw at you, and neither did the dog. I hope that makes it perfectly clear what we have here.

It's musically intricate and rather thoroughly off kilter. Now I know some of you. like me, respond to this sort of thing. Thank you Northern-Spy for putting this kind of stuff out.
Posted by Grego Applegate Edwards at 6:21 AM