Neil Young DVD: Here We Are in the Years, Neil Young's Music Box 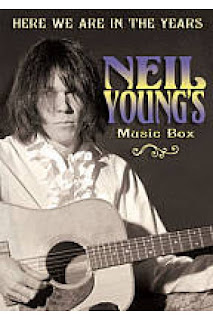 Neil Young has gained great success at the same time as he has followed his own muse. Rock, folk, country, electronic and otherwise, he has never been content to rest within a particular style. For more than 40 years he has exemplified the artist-as-seeker, the human musical force who can and does recreate his musical identity with every new album.

There's a new two-hour documentary DVD that captures pretty well the many influences and stylistic forces at play in Neil's long career. Here We Are In the Years: Neil Young's Music Box (Sexy Intellectual SIDVD 565) is a more-or-less chronological look at Neil Young's music biography from his teen years in Canada through the '90s. Interviews with friends and associates, some concert footage, and discussions by music journalists spice the narrative. This is an independent production coming out of England, so we do not get much in the way of personal commentary by Neil Young himself, and that is a bit of a pity.

However what we do get is an in-depth look at the various influences that have acted upon Neil's musical sensibility and in turn his creative response to them. One factor that emerges clearly is that Neil Young's early years in Canada helped shaped him in ways that perhaps an artist in England or the US might not have experienced. So for example Neil was influenced by the British instrumental group the Shadows as much or more so than some of the instrumental groups that were enjoying success in the US at the time. That he also apparently highly appreciated the Tex-Mex Fireballs group is another interesting factor that would perhaps not be typical of a budding musician in the Northeast USA. At any rate the documentary gives a detailed look at Young's exposure to Roy Orbison, the US and Canadian folk scene, the British Invasion and his dual allegiance to the melodic Beatles and harder rocking Stones, and on from there.

Anyone with a serious interest in Neil Young's music would find this DVD illuminating. The lack of commentary from Young himself does detract a bit from the impact of the discussion, but in no way seriously impedes a rather insightful look inside the creative mind of one of rock's masterbuilders. Recommended.
Posted by Grego Applegate Edwards at 7:13 AM