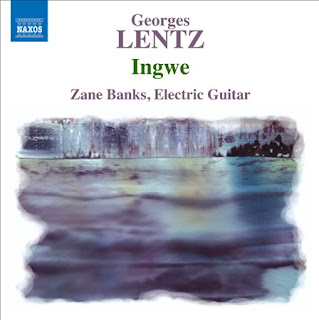 With the advent of the fully cranked metal guitar as played by various luminaries from Hendrix to Van Halen and beyond, with the help of their handmaidens the electrical engineers who developed amplifier, stomp box, and guitar electronic technology to where it is today, it was inevitable that the sonic arsenal such players could unleash be utilized for forms of music beyond rock. Of course jazz fusion incorporated the sound possibilities early on, and people such as Terje Rypdal pioneered the use of highly sustained sound in works of a classical nature.

And so we live in a time when the release of Georges Lentz's Ingwe (Naxos 8.572483) not only does not shock, it seems quite natural. What we have is a recording of a full length piece for solo electric guitar, played with a bit of dash and flair by Zane Banks. It is, as you have gathered, a work that makes full use of the sounds and techniques of heavy metal guitarcraft.

There are sections of relative quiet; there are sections of bravadosian crank; there are passages somewhere in between. I am not entirely sure that what we have here is a masterpiece, but it does make excellent use of the shred style for a long formed piece of great atmosphere. It should appeal to those who hear the idea and say to themselves, "what a cool thing to do!" If your reaction to the concept is something other than that you may find yourself better looking elsewhere for some musical stimulation. Kudos for Lentz and Banks!
Posted by Grego Applegate Edwards at 7:11 AM