Ark Ovrutski and his Sounds of Brasil CD 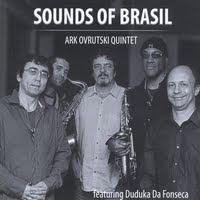 Ark Ovrutski, bassist, rooted in Russian, Ukranian, and New York City culture. . . .So why does he do a Brazilian flavored jazz album, Sound of Brazil (Self-Produced)? Why does anybody do anything? He's into the style is the obvious answer. What counts is the music, of course.

So he got together with drummer Duduka da Fonseca and put together a nice quintet of Brazilian and American musicians, namely Craig Handy (flute, alto, tenor), Jorge Continentino (flutes, tenor, bari), and Helio Alves (piano). They amassed some hip tunes and arrangements and. . . well there you have it. Duduka, Helio and Ark have much to do with getting a samba groove going and then the reeds get their solo shots (along with good piano and bass solo slots). Everything gels. If this sometimes sounds more like the Corea ventures into samba territory than, say, the Zimbo Trio, that can be understood. There are Afro-Latin elements (quasi-Tyner-esque?) in the rhythm department too, but that fits in fine.

This is an album that gets in good solo time, gets a Brazilian-American groove hopping with a modern jazz looseness, and pleases without pandering.
Posted by Grego Applegate Edwards at 6:18 AM