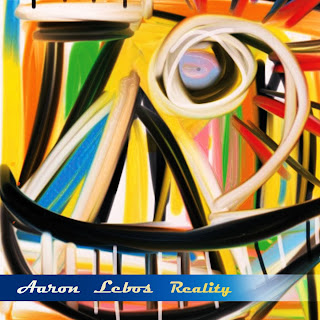 Aaron Lebos comes out of the new fusion explosion with both a guitar style and instrumental writing not unoriginal. That is the case with the album I was sent recently, called Reality (self-released). It's Aaron with a quartet that includes Eric England on electric bass, Jim Gasior on keys, and Rodolfo Zuniga on drums. Jim proves an able second soloist and the band has a good rhythmic feel throughout.

Aaron's guitar-centered compositions and tasteful solo style carry the day in the end. There is the slightest hint of an Alan Holdsworth sort of feeling in his playing but really not all the much, just in the way he sustains notes sometimes and the bends he sometimes gets on a note. Aaron comes through very much as his own player ultimately.

It's a bracingly fine set of numbers here. And you have to dig the bold hipness of the guitar electricity. Yeah!