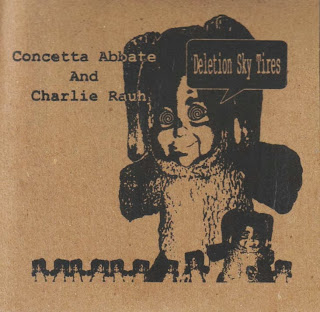 Nothing is fixed forever on this earth or in the heavens. That may be an important lesson we have learned in our lifetime, or perhaps it's just a commonplace and everybody has held on to the notion from time immemorable. I sure feel that nowadays, though. Just look at the "serious" music scene. No release is necessarily the obvious, because the obvious is no longer set in stone. So anything can and does go.

The EP by Concetta Abbate and Charlie Rauh, Deletion Sky Tires (Brainplanrecords), is a good example. Unless you already know what Concetta and Charlie have been up to (and we have discussed them previously here) you would have no idea what to expect. But what you do get has an unexpected quality, which I suppose is what you SHOULD expect!

At any rate Concetta plays the violin and sings now and again. Charlie is on the electric guitar. This is chamber jazz/new music that has a definite sound and style all its own. It's two-part composition/improvisation of a carefully thought-out sort. More tonal and sequential than anarchic, improvisation and composition meld together seamlessly; the arrangements have spontaneity and deliberation in equal amounts.

Each of the eight pretty short pieces has its own particularity. Charlie plays some very interesting guitar, schooled but also immediate; Concetta has creative directness and her own way on the violin. Her vocals are of the "band" variety, in that they make no pretentions of themselves other than expressing the line and lyrics clearly and musically.

So there it is, 20-something minutes of something well put together and different. This is not what you might expect. It is straightforwardly and captivatingly a music of today, though, so trash the expectations and experience it. Go to brainplanrecords.blogspot.com for more info. This is a limited quantity release so get over there ASAP if you are interested.

Posted by Grego Applegate Edwards at 8:42 AM