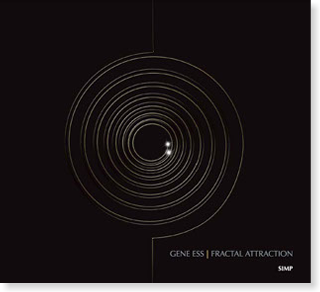 There is never a shortage of lesser known, upcoming players out there. What of course is heartening is that some of them are very good. Guitarist Gene Ess is one, as much here today as upcoming, that caught my ear by way of his album Fractal Attraction (SIMProductions 130315). He graduated from Berklee after studying with Jerry Bergonzi and Charlie Banacos and moved to New York in 1991. He was a member of the celebrated Rashied Ali's group through 2003. And he has gotten attention and acclaim with two albums prior to this one.

Fractal Attraction is an album in the progressive contemporary jazz mode. It features some hip, sophisticated compositions by Ess and one co-written with vocalist Thana Alexa, as well as one wholly by Alexa, who is an important part of the quintet on the album. She is featured as wordless vocalist and scat artist to very good effect. Rounding out the band is David Berkman playing some rather advanced piano and a strong rhythm team of Thomson Kneeland (bass) and Gene Jackson (drums).

The band has very much its own sound--thanks in part to the melodic-harmonic stylistic progressiveness of the compositions, the vocalist as ensemble member and the beautifully acrobatic playing of Maestro Ess. It's music that pulsates nicely, has interesting changes-based improvisation structures and maintains a consistently high level of musicianship from first to last.

Thana has real scatting chops and holds her own as a "horn" in the soloing routines. Gene can blaze over a set of changes in very cool ways while keeping a personal style to the forefront. He isn't a "sounds like x" player so much as HE is an X himself, which is saying a great deal in a contemporary guitar world filled with influenced players.

The whole band has something going for themselves. Fractal Attraction will give great pleasure to those who like jazz that is fully of today yet has postbop roots. And the Gene Ess guitar presentation will make you a believer. Lots of wonderful music here. Get it!

Posted by Grego Applegate Edwards at 7:15 AM