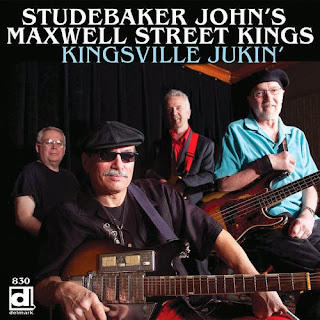 Everybody is always talking about what went down at Sun Records and how that managed to conjoin the blues with what eventually became known as rock. Now I have nothing bad to say about all that. But from the perspective of right now, it seems to me that what went down in Chicago, both right then and a little bit later, has proved to be more influential to rock (at least once England got into what was doing) than Presley, Lewis and those cats did, though of course Elvis got all that attention.

Think of Elmore James and the classic bluesman who recorded for Chess, Checker, VeeJay and of course eventually Delmark. To me they stand the test of time and get more hard rocking things happening that still sound as good today as ever. I don't really care if somebody says I am wrong about it. My ears tell me.

Very much on that note today is Studebaker John's Maxwell Street Kings and their new album Kingsville Jukin' (Delmark 830). Now this isn't the first from this guy, but man, it's the BEST. Studebaker John gives out with the vocals, harmonica and hard-driving rhythm guitar and he is aided and abetted by a hot band of 2nd guitar, bass and drums.

What gets me especially about this new one is how consistently they hit it with that old time hard rockin' Chicago blues. It's 16 slices of stompin' swamp rock that does not let up. Some songs you'll probably get the feeling you recognize somehow, some not. But it's the best kind of deja vu because unlike Yogi Berra's version it isn't "all over again". It's been there but its back, it's new. Because it has enough that identifies it as Studebaker John and his band that you don't at all feel like a clone in cloneland. It's Kingsvilleland, and you are no clone, right?

I am not going to lie to you. Why would I? I am not getting paid to say it. I am not getting paid, PERIOD, dig? THIS is gonna pop your cork if you gravitate to that hard rocking, boogie jukin', no-prisoners-taking stomp. And my partner Susan agrees, so that seals it. I tell you no lie. Get this one and roll back the rug!

Posted by Grego Applegate Edwards at 8:14 AM