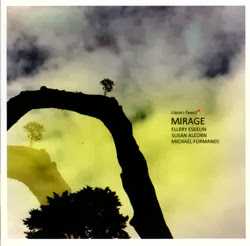 There can be no real rules that limit the way music can and should be made, except those the musicians themselves choose to accept. This is how we get innovation, how music can flourish, advance. And so today we have an example of a trio working within the freestyle world of today's avant jazz, who have adopted certain practices and have agreed (not necessarily by a lot of verbal discussion, but at least intuitively so) on a set of assumptions to create a series of improvisations that have their own internal consistency.

I speak of the album Mirage (Clean Feed 271) as played by Ellery Eskelin on tenor sax, Susan Alcorn on pedal steel guitar and Michael Formanek on acoustic bass.

These three are well-suited to work together in the exploratory zone. Eskelin has for quite some time been a tenor player of great imagination and inventiveness. He comes through once again here with some inspired playing. Susan Alcorn may not be a household name right now but has established herself as that most unusual of things, a free-avant player of the pedal steel guitar and she is good, very good. Then there is Michael Formanek, a contrabasses's bassist, a guy that can and does do it all, whether pizzicato or arco.

Put the three together and set them loose as they are on this album, and you have something. In some ways it is the plastic, open sound of Alcorn's guitar that immediately places this sound world elsewhere than where one might expect. But then it's the three together that make real magic. It's a live recording from 2011. It was a most productive meeting.

You really should hear this one.